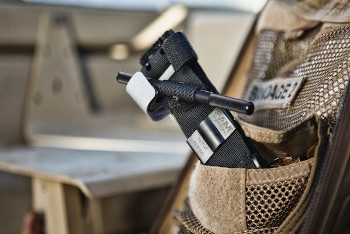 Recent events in geopolitics forced people to search for training opportunities concerning first aid in everyday life and more dramatic events. With increasing numbers of people seeking knowledge and abilities, we can also notice an increase in sales of all types of first aid kits.

With American elements flooding European culture also the elements of their military clothing or equipment started to be seen on the streets. One of such elements is Improved First Aid Kit, or IFAK for short. This first aid kit worn on a belt or backpack became an important element of equipment for people feeling responsible for life and safety when hiking, working with guns, or being service members.

Elements of IFAK are chosen in such a manner to provide the ability to treat the most common injuries that occur to US Army soldiers in the battlefield. Having said so, we will find there mostly means to stop massive bleeding and protect airways. Elements of such US army individual first aid kit include:

Such a set of equipment in an individual first aid kit allows every soldier to treat most common wounds and stabilize injured personnel until the arrival of qualified medical personnel. Having all elements in IFAK as easy to use as possible allows military personnel to utilize it whole after a short training period.

Marine Corps IFAK, first aid kit for the workhorse of US military

Being the first to send into the hot zones, soldiers of the United States Marine Corps often get under heavy fire, which results in a high risk of injuries of all kinds. Luckily, their military first aid kits are well-prepared to treat intensive bleeding, extensive wounds, and burns.

US Marine Corps IFAK consists of:

As we can clearly see, an individual soldier doesn’t have a Nasopharyngeal airway tube, which is used to secure upper airways. Contrary to US Army IFAK the individual first aid kit of US Marine Corps consists of way more dressings, antiseptic measures, and burn dressings, which we won’t find in an army-issued one.

Not only our allies from across the great water have their IFAKs equipped with modern dressings and treatment solutions, but the polish army also has their first aid kits equipped to address different types of injuries which may occur on the battlefield including massive bleeding, chest wounds, or securing upper airways.

As you can see at the first glance, the polish army IPMED is about the same size as US Army IFAK, with that noticeable difference, that the polish army first aid kit includes an autoinjector with morphine to fight strong pain caused by injuries, which we won’t find in any other of described first aid kits.

As most people will probably easily tell us what gloves in a first aid kit look like, or what a sharpie or gauze bandage is, people without any civilian or tactical medical experience might have problems with explaining what some of the military first aid kit elements are. Running to the rescue, we will try to explain what some of them are.

The nasopharyngeal tube is used in many military-issued first aid kits as a way to secure upper airways. The tube is put into the nostril and goes all the way to the upper back part of the throat. It is very useful when the injury prohibits the usage of the mouth to breathe. This type of tube can be used both on a conscious and unconscious patient.

Chest seal is an occlusive chest wound dressing to be used on sucking chest wounds for treating open pneumothorax and preventing tension pneumothorax from occurring. Such types of wounds are often associated with military work, as they are caused by piercing wounds or gunshots into the chest. Because of so high probability of those types of wounds, most of the modern IFAKs have chest seal dressings. Those occlusive chest wound dressings have a one-way valve, which allows air and fluids to escape from the patient's chest and doesn’t allow them to enter the patient's body.

A tactical tourniquet is a quick solution to initially secure massive bleeding from extremities. By applying pressure on soft tissue, it closes the artery, thus stopping the bleeding. It's nothing strange that they are part of military first aid kits all over the world and are slowly becoming standard equipment for every lifesaver. About different models of tactical tourniquets, you can read in our other blog post.

Car, home, hiking, or military - which first aid kit should I choose and when?

There are many types of first aid kits available on the market which are dedicated to being used in different conditions and situations. We should choose one by taking into consideration where we may be using it, in what conditions, possible dangers and types of wounds, and our own first-aid skills. For sure, we shouldn’t be carrying anything in our first aid kit that we won’t know how to properly use.

If our personal first aid skills are not a problem, the main two things to take into account when choosing a first aid kit are the possible dangers and injuries which may occur. At home, we will be looking at small cuts, and bruises, but while hiking we should be more concerned about broken bones, sprains, or hypothermia. We need to remember, that a well-chosen first aid kit will not only help us in a critical situation, but also won’t weigh us down and let us down in an emergency.

Taking that into consideration, the military first aid kit should only be used in the environment, where it has the most sense because of possible risk factors like shooting ranges, hunting trips, or service duties. Additionally, we need to remember that a car first aid kit will not have equipment fit for such wounds, so we should always remember to choose our kit wisely.

A word of warning, because life is worth more than we may think

When buying medical equipment, we need to remember to always choose products from certified sources, because only then we may be sure that if we will do everything well, we won’t expose the injured to more dangers. Low-quality dressings or other types of equipment or its copies may pose a deadly risk, cause infections, allergic reactions or work incorrectly.

Also remember, that even the best first aid kit will mean nothing without training and knowledge. If you do not know how to use certain dressing, you would probably make it better not to use it at all. When using medical equipment which you are not familiar with in a manner that was not intended, you may turn a theoretically safe situation into a big life hazard.