Which rifle sling should you choose? 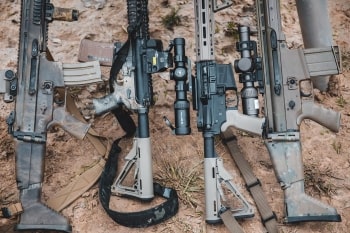 It will sound banal, but the rifle is only useful when you fire it. In any other situation, it is a four-kilo weight that prevents us from moving and manipulating other objects. The suspension is therefore a necessary, but unfortunately often underestimated element of the equipment. In this post, we will try to create a short overview of the solutions used in suspensions for carrying firearms. After this short reading, you should know what to expect from the product you plan to buy.

First of all, we must remember that the gun sling will be responsible, to some extent, for our safety, and certainly for the comfort. A properly designed and made belt will guarantee us both comfortable wearing and will allow for quick access, folding up and transferring the weapon between the right and left sides. We must remember, however, that the suspension must match the characteristics of the use of our weapons. Completely different features will be useful for long patrol and other for dynamic CQB situations.

There are three types of tactical suspensions due to the form:

The choice of suspension, of course, depends on personal preferences, but it is worth noting that, depending on the type, specific models work better or worse in certain situations. Unfortunately, there are no ideal solutions here, so the most common choice of most users is a solution that can be described as indirect, about which later.

Above all, however, you should remember to choose models from reputable manufacturers when buying sling, which will guarantee reliability. The counterfeit constructions, although sometimes they imitate the original form well, will never achieve comparable quality - so the buckle works as in a four times more expensive strap, if it breaks after a few weeks of use. 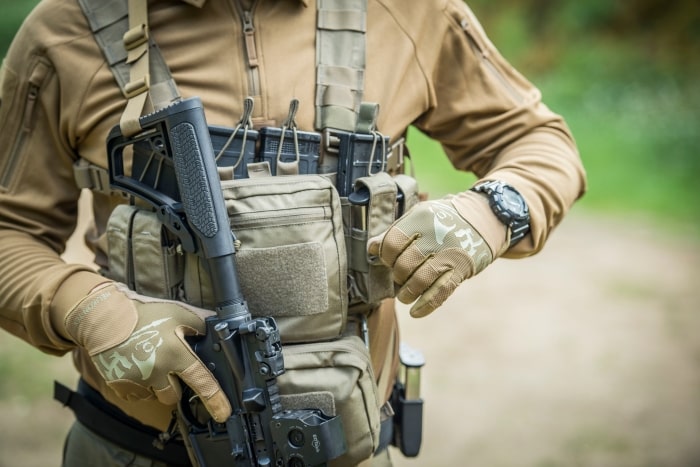 This type of suspension allows us the greatest freedom in the use of weapons. The design is based on a single loop that is placed on the user's body. There is only one strap with a mounting buckle from the loop - the carabine is attached to one point, hence the name. This requires a place where we can attach our carabine. Of course, no one will forbid us to attach such a strap to the stock, but it will not be the most ergonomic solution. One-point slings are attached to the areas where the stock or its guide are connected with the receiver, depending on the weapon model.

What is the conclusion? First of all, high maneuverability - the sling practically does not limit the movement of the weapon. There are also solutions that additionally prevent restriction of movement - flexible inserts in the suspension structure known as bungee. They are valuable especially when transferring weapons from one side to the other in the case of tactical shooting with the use of covers. 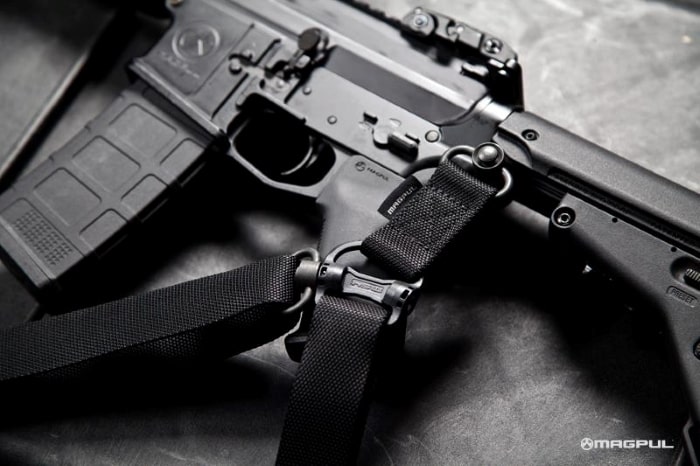 Nothing is perfect, however, and you need to remember about one major disadvantage of this type of solution - the instability of the weapon at the time of its drop. The weapon hanging on a single strap has a tendency to swing, and in the case of an improperly conducted drop, the carabiner may end up between our legs instead of on our side. Also, running with the carabiner in this position will not be the most comfortable - one mounting point means that our weapon will jump while moving.

The two-point suspension is a much more stable solution. In its case, the carabine is a closure of the sling loop, so it will behave much more predictably. In addition, the two-point sling enables comfortable carrying the weapon not only in the ready position. It will be especially valuable both during long patrols and, for example, for hunters taking part in all-day hunting.

Two-point tactical sling brings us one more advantage - the possibility of personalization. First of all, it allows you to attach the suspension at various points - the front buckle can be attached to any point of the handguard, according to your preferences, while the rear swivel can be attached to both the receiver and the stock. It will also be incomparably more comfortable during long use - it is due to two factors.

First of all, it is not only the arrangement of the mounting points that translates into increased comfort compared to a single-point suspension. The two-point mounting also limits the section where the belt touches the body - this makes it easier, for example, to cushion it with a slip-on comfort pad. In the event that we do not use a tactical vest, it will be very important, as well as the fact that the belt will not press against us under the breast. It is also worth remembering that, in contrast to the one-point sling, the two-point sling allows, apart from the "tactical" way of carrying weapons, a bit more "hunting". Using a European, American or African carrying method will come in handy when moving with a weapon for a long time. 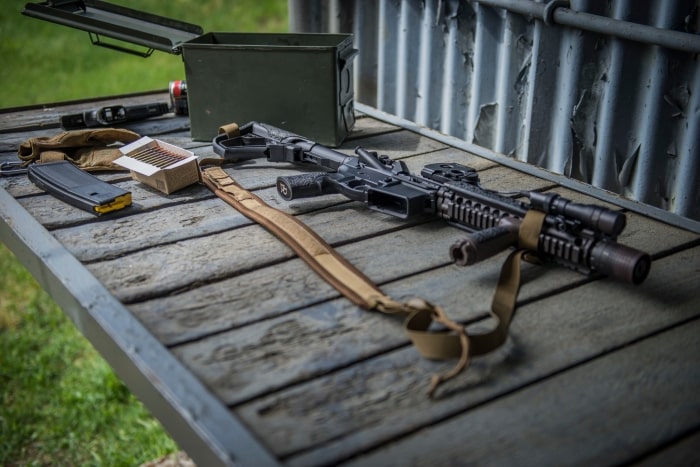 Since we have discussed these two groups, it is worth mentioning the solutions that combine the advantages of both mentioned types of slings for weapons. Multifunctional models such as the Magpul MS3 and MS4 tactical slings allow the use of two systems thanks to the patented fastening buckles. During long-term wear, we can use two attachment points - on the bed and the back of the chamber. However, it may happen that we expect a situation that requires us to be more dynamic when transferring weapons, for example when inspecting a building. Then we attach the buckle from the bed to the fastening buckle placed on the suspension, thanks to which we create a one-point suspension in a few seconds, perfect for CQB situations.

It is also worth mentioning the three-point suspensions that combine the features, but not necessarily the advantages of the other two systems. The word three-point can be a bit confusing. The carabine is still attached at two points - in this case, however, the most common mounting points are on the stock and the end of the stock. The difference, however, is in the way the whole is hung by the user's torso. The specific structure of the belt surrounds the body in a similar way as in the case of a single-point sling, while it is attached to the weapon as in the case of a two-point sling. 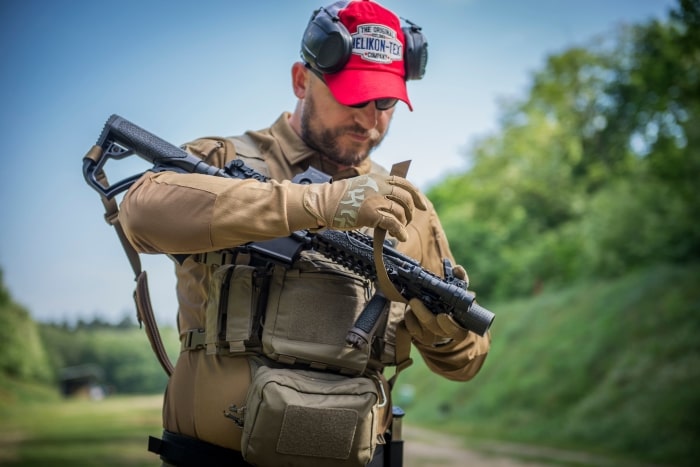 What is the conclusion? First of all, the very high stability of the carabiner after the release. In the case of a three-point suspension, its uncontrolled movement while running is very limited. This advantage, however, comes with several serious disadvantages. First of all, the complete lack of a comfortable transfer of weapons to the other arm. In addition, quick release from this type of suspension will also be radically difficult.

Since we have discussed the types of rifle slings, it is worth mentioning one more, extremely important element, which are swivels / attachment points. In the simplest variant, it will, of course, be a tape intertwined through a hole in the stock and, for example, an integrated handle, as seen in classic variants of AR15 carbines. In this case, however, we can forget about the possibility of quick disconnection or easy reconfiguration. If you do not like to keep your weapons in the closet with the sling attached during storage, each time you detach it with this method of mounting may be difficult. 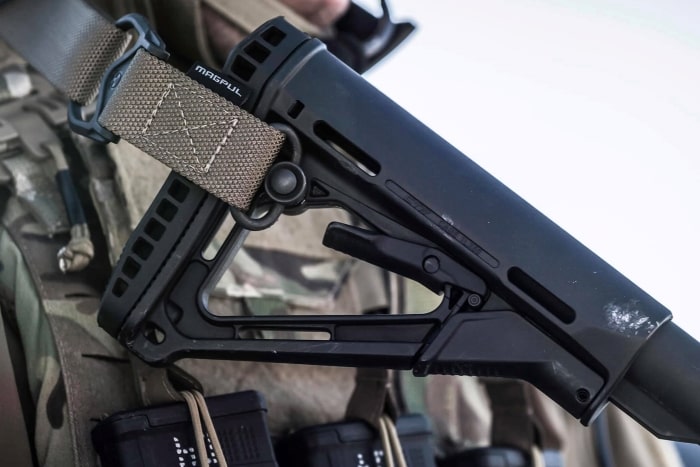 For this reason, QD swivels are much more popular. These are quickly detachable lugs, equipped with a button and bearing balls. After pressing the button, the balls hide inside the buckle, disengaging the sling from the weapon. In the case of classic designs of this type, however, there were several problems limiting their usefulness. These included the fabrication of the mechanism, which made it stop blocking the latch effectively, and the latch rotation in place, causing the belt to twist when worn.

For this reason, companies specializing in the design of tactical equipment have patented several solutions to correct the errors of the original. Starting from HK buckles with a relatively standard carabine design, through models such as Magpul QDM, which are an advanced development of the QD buckle idea, to completely proprietary solutions such as ITW Nexus MASH, ensuring comfort combined with functionality and simplicity. We will tell you about the accessories and elements that we will meet in tactical suspensions in the next post.