The most interesting recreational airguns 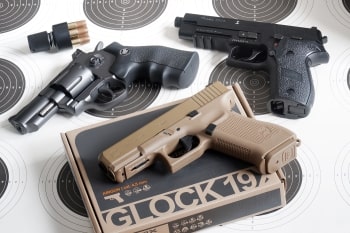 Whether it's for shooting during a barbecue or for self-training, recreational airguns are great entertainment during the spring and summer season. More accurate and less susceptible to the influence of wind than airsoft replicas, they are ideal for shooting at improvised targets such as cans or bottles. Therefore, we have selected for you some of the most interesting models with typical recreational characteristics. Instead of surgical precision, expect more breech recoil systems, magazines, and overall fun.

At the beginning, however, let's mention a bit about safety and useful accessories. First of all - if you are not shooting in a typical open space, or you are using metal targets, always use protective goggles - steel ball shots ricochet more easily than lead devil, and it is not worth risking your eyesight. We probably don't need to remind you that you shouldn't point the barrel in a direction other than your target or the ground. The safety of you and your surroundings is definitely more important than even having the best fun.

The most popular manufacturer of pistols in the world has seen a lot of development in recent years, both in terms of the evolution of the Glock 17 and the expansion of its derivatives offer. The 19X is probably the most interesting of them, combining the full-size frame of the 17th with a shortened slide known from the 19 model. Umarex allows us to enjoy this pleasant-to-use design in the form of a 4.5 mm BB shotgun. In addition to the basic model, the manufacturer's offer also includes a version with simulated bolt recoil, which increases the realism of using the gun. 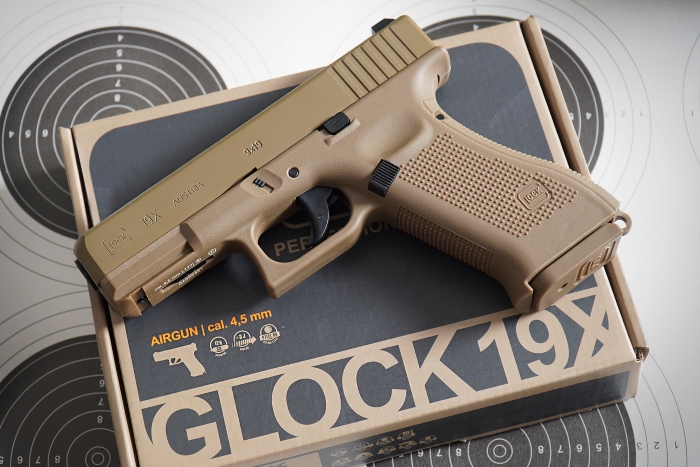 The gun perfectly reproduces the Glock visually, and its colors, designed for military tenders, are an interesting departure from the classic offer of the manufacturer. As in the original, metal sights with three contrasting dots are much better than the basic ones. Thanks to the contract signed by Umarex with the original manufacturer, the airgun has licensed markings, which perfectly complements the aesthetics of a realistic gun.

From the realism point of view, the WinGun Sport 708 air rifle seems to be a very promising model. Although it is not based on any existing firearms model, it perfectly imitates the operation of the revolver. The most interesting element of the whole system are dummy cartridges in which we place the pellets. The cartridges are then loaded into a retractable drum in the same way as in a firearm. 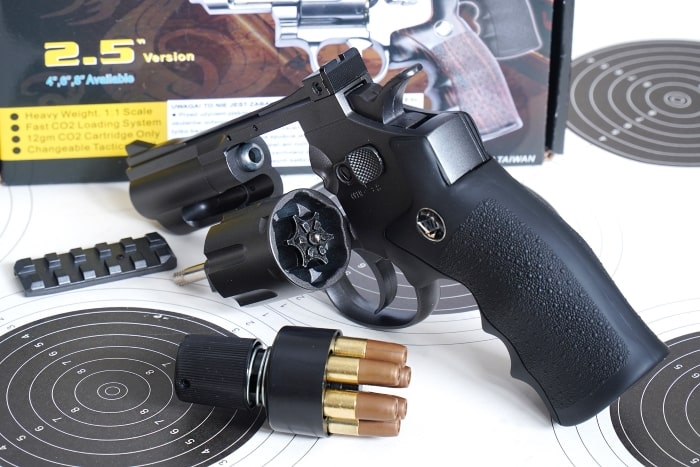 The air rifle is powered by CO2 capsules, which are placed in an extendable grip. A very comfortable solution is the foldable ear that allows easy and quick replacement of the used capsule - in most similar constructions, an inbus is necessary. The method of power supply guarantees the revolver a surprisingly high muzzle velocity for a short air rifle. The trigger mechanism, working in a double system, with self-cocking, is also noteworthy. This allows us to both quickly fire consecutive shots by simply pulling the trigger, and pull the hammer to the rear position, thanks to which we shorten the trigger path, obtaining a more stable and precise shot.

For a change, something with a carbine design - the Gamo Replay-10 airgun with a magazine. This solution is rarely found in spring airguns - in the case of precision shooting we do not need a rate of fire, while in the case of recreation it will certainly provide us with more fun. As the air rifle has a broken structure, before each shot it will be necessary to tension the spring with the barrel, while the loading mechanism is already responsible for introducing the bullet into the chamber. 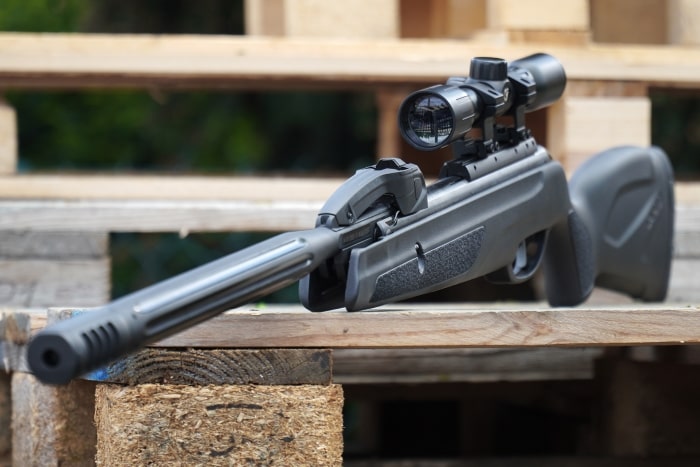 However, this is not the only interesting feature of the rifle. It uses an ICS gas spring, which is responsible for the above-average work culture of the air rifle and significantly reduces the vibrations generated during the shot. Compared to classic metal springs, the gas spring also generates noticeably lower recoil. In combination with the included scope, it will allow us to make precise shots at slightly longer distances.

The P226 is probably the most popular pistol from the SIG Sauer offer - one of the most renowned firearms manufacturers in the world. The company, whose roots date back to the nineteenth century, has significantly expanded its offer in recent years, including the production of AR-15 carbines and pneumatic pistols. In the case of the latter, apart from above-average realism, they offer the possibility of shooting diablo pellets, which is not standard for air rifles-replicas. This is an undoubted advantage due to the greater stability of the flight and the possibility of selecting various forms and weights of shots. 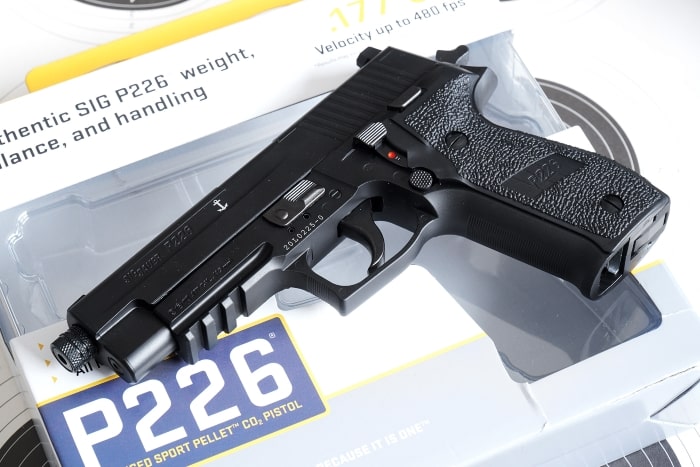 The air rifle, as we have already mentioned, is based on the proven SIG P226, which has been used in many uniformed units around the world for years. Great ergonomics and high reliability made it very popular. The airgun perfectly reflects the handling of the weapon, thanks to the functional manipulators and the blow back simulation system. The magazine consists of two sections, each containing 8 diablo pellets. The use of CO2 power translates into a high initial velocity of the projectile and a solid recoil during the shot.

And finally, something for younger shooters - the PCA Crosman air rifle, loosely based on the Remington 1100. The model has slightly reduced dimensions compared to the original, which will significantly facilitate handling for younger users. The economic aspect of the discussed model also seems very attractive - PCA air rifles only require shot to operate - the air is compressed with a pump integrated with the carabiner. Therefore, it does not require the purchase of CO2 capsules or the pump known from PCP airguns. 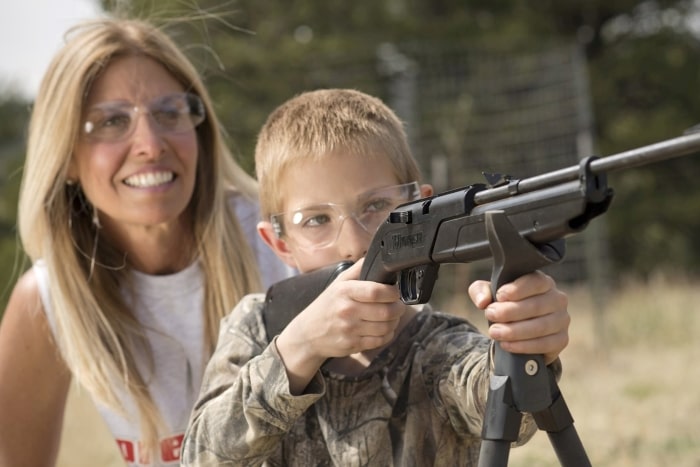 The power supply is interesting here because it allows you to adjust the muzzle velocity of the pellet. Depending on the distance of the target, we can pump up the airgun several times, thus achieving higher pressure. Let's not forget about the "cartridge chamber" - thanks to its universal design, we can shoot both steel ball pellets and lead pellets of the diablo type. Therefore, we can both use a cheap and quick-firing solution thanks to a large container or play precisely, at longer distances, using shots with better aerodynamic properties.