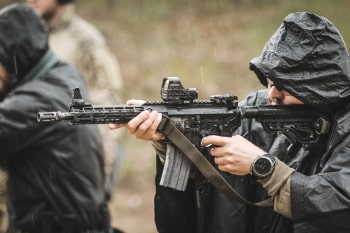 Recently, it was about suspensions in general, today we come to the specifics. We have selected a few models from our offer, which in our opinion are worth paying attention to when making a purchase. We made sure that each of the types described above was found, we also distinguished a great hybrid model from Magpul, and we proposed a budget option for beginners.

It is worth remembering that if our needs do not require a large budget, it is better to turn to simpler products, but better made than packed with gadgets of dubious quality. A piece of tape for PLN 5 will most likely be of quite high quality. A modern, quick-release buckle for PLN 5 will be a low-quality fake that will break down soon. Better if something is simpler but more reliable than effective but breaks down after a few uses.

In the case of suspensions, this rule is verified very often. During the run, a carabiner of several kilograms exposes our suspension to considerable overload. Therefore, we must pay special attention to solid mounting points so that it does not turn out that at some point our weapons will escape from our tether. There are renowned manufacturers of suspensions on the market, as well as the hardware itself, such as clamps and guides. One of them is the American company ITW Nexus that holds patents for several types of mounting clamps.

Gun slings that caught our attention are:

The ITW Nexus company does not need to be introduced to anyone - the Polish manufacturer is famous for good quality tactical equipment at prices optimal for our conditions. Like the chest rigs, pouches and belts, the tactical sling shown here offers great value for money. The simple design allowed the manufacturer to focus on the quality of workmanship, resulting in a comfortable and solid sling with a universal form. 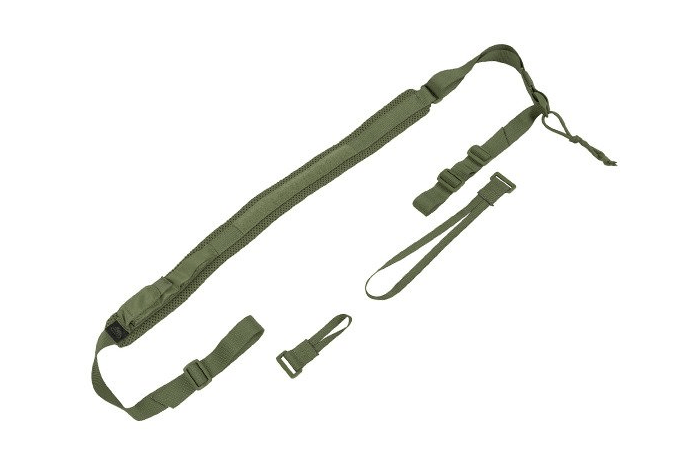 The belt is a standard, two-point structure, equipped with a comfort pad, which improves comfort during long-term use of the suspension. Classic loops made of nylon webbing are used to attach weapons. In the event that we would like to be able to release quickly, the straps allow you to attach QD buckles purchased separately. Such a solution will allow us to adjust the suspension to our needs, and will reduce the initial expenses. The quality of the construction is evidenced by the use of buckles from WooJin, one of the most renowned manufacturers of this type of equipment.

When looking for something a bit more advanced, it is worth paying attention to the basic model from Magpul, based on the manufacturer's patented quick-adjusting buckle. Magpul tactical slings are highly regarded in the shooting environment thanks to their versatility and reliability. The MS1 model, at its much lower price than the other models, is a great choice for the first belt. On the one hand, thanks to its design, it can remain our last, on the other hand, encouraged by the quality, we can get drawn to more advanced models, such as the MS3 and MS4. 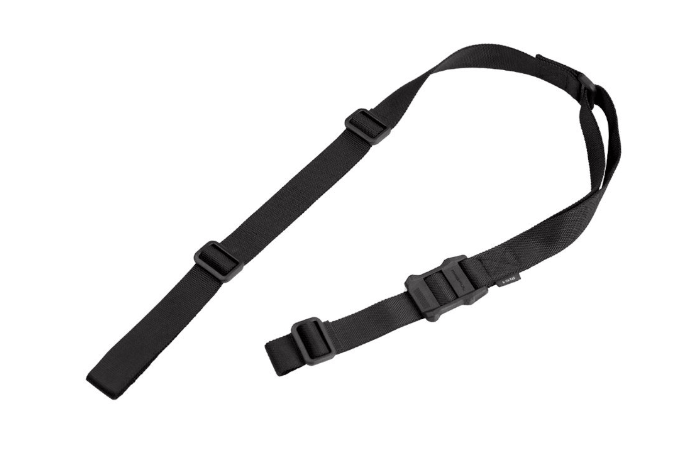 Moving on to the construction of the model itself - a two-point sling made of nylon tape is attached to the weapon with tapes with a ladder buckle. The carrying strap, however, is distinguished by the use of an adjustment buckle - Magpul MS1. A convenient accessory allows you to quickly change the length of the sling, making it easier to transfer the weapon to the other arm or limiting the movement of the weapon. Due to the general simplicity of the Magpul MS1 sling, we can expect maximum reliability and longevity from it. The tape fastening points allow, like in Helikon, for direct mounting or the use of separately purchased QD buckles.

For a change from the two-point models, it is worth mentioning the 5.11 VTAC® Bungee SPS sling. Kyle Lamb - one of the most recognizable shooting trainers and former operator of the elite Delta Force - participated in the design of this structure. Kyle, thanks to his enormous practical experience and no less impressive theoretical background, has been creating the highest quality tactical equipment for years, sold under the Viking Tactics - VTAC brand. The belt created for 5.11 is based on its designs that gain recognition among soldiers around the world. 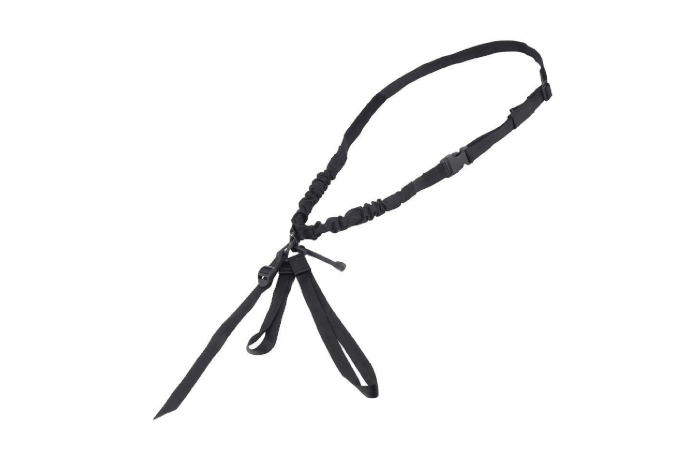 The VTAC Bungee SPS model is a single-point tactical sling, which makes it perfect for dynamic situations in confined spaces. In this case, the transfer of weapons from the shoulder to the frame will be practically unlimited thanks to the additional use of a flexible “bungee” insert. However, it is worth remembering about the limitations of this type of construction - above all, about the very limited stability when dropping the weapon. The combination of a single-point mounting with an elastic strap makes the fallen carabiner jump during intense movement. Of course, the suspension is not intended for patrol applications, and if we use it as intended - for CQB situations - it will be a great companion for our carbine.

The MS3 tactical sling by Magpul is a very interesting design - a successful, uncompromising hybrid of one and two-point suspension, allowing you to adjust the form to the situation. Thanks to a specially designed, polymer ring, it is possible to quickly disconnect the front buckle from the bed, thanks to which we can quickly and easily obtain a single-point suspension. 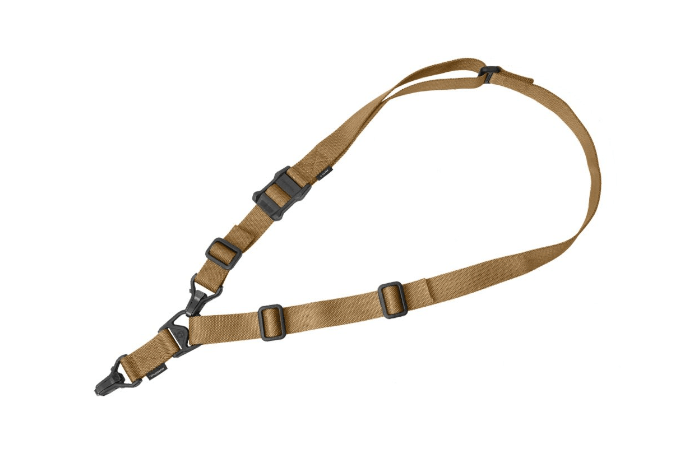 The construction of the buckles themselves is not without significance here. First of all, the suspensions use the previously described MS1 buckle, which enables efficient adjustment of the belt length. Secondly, the ends of the buckles feature Magpul Paraclip quick release buckles. They combine the advantages of classic QD and HK buckles. Their design allows for extremely quick release using a convenient button with a spare lock. However, unlike standard QD buckles, they have no problem with wearing parts that may cause accidental release. In this way, they refer to the usability of HK buckles, being much easier to unfasten than them. Like the HK buckles, they facilitate quick re-insertion into the carabiner.

And finally, a slightly more non-standard solution - a three-point suspension. In this case, we will use the Condor Tactical 3-Point Sling as an example - we could say the model three-point suspension. We talked about the essence of using this type of slings in the previous blog - in short, they ensure very high stability when dropping a weapon. Re-drawing a rifle is also easier for this reason. 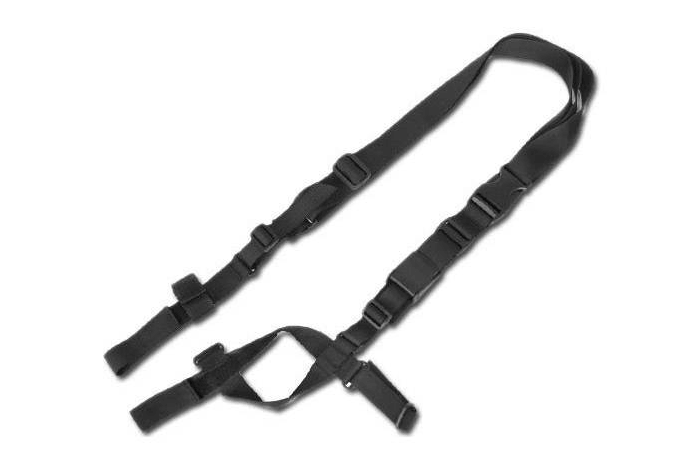 Unfortunately, we must also remember that the rather complicated structure of the three-point hitch can cause some kind of problems. First of all, quick release is practically non-existent with this type of sling. We must also remember that the suspension in question is a bit more cumbersome to put on and take off. However, if the stability during the drop is very important to you, the suspension from the Condor will provide it in a way that is incomparable to other models.