Pepper spray in a gel, aerosol or foam? Which one to choose? 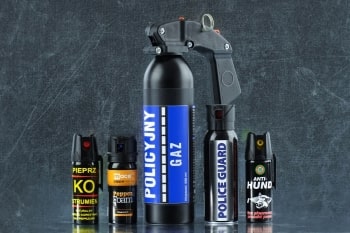 Pepper spray remains the cheapest and easiest method of legal self-defense. Unlike telescopic batons, which require a lot of skill or expensive stun guns, the use of pepper spray requires minimal training and ensures high efficiency. Most importantly, however - pepper spray does not adversely affect the health of the person exposed to its influence - contrary to urban legends, the application of the gas does not cause blindness.

Research carried out in 2000, the results of which were published in IVOS - the publishing body of ARVO (the American association of doctors and scientists in the field of ophthalmology and related studies) showed that a single exposure of the eyes to pepper spray leaves no lasting effects. Therefore, when using pepper spray, we do not have to be afraid of the consequences of the actions we have taken in defense (unless, of course, we used the gas for its intended purpose and as part of actual personal defense).

Moving on, however, to the gases themselves - there is a very wide range of products of this type on the market, and due to their similarity, it is sometimes difficult to say which version will be the most suitable for us. To clear up any doubts, we encourage you to read one of our previous entries - ENTRY. Today, however, we would like to present you a few models that aroused our interest and that we can recommend to you with a clear conscience.

Klever KO Jet is a classic, produced by one of the most proven companies dealing not only with the creation of defense gases. The company has been known for over a hundred years for the production of preparations for cleaning weapons, including one of the most recognizable in the world Ballistolu. Klever KO gas is very similar to Ballistol in one aspect - its effectiveness has been verified over the years of its presence on the market. 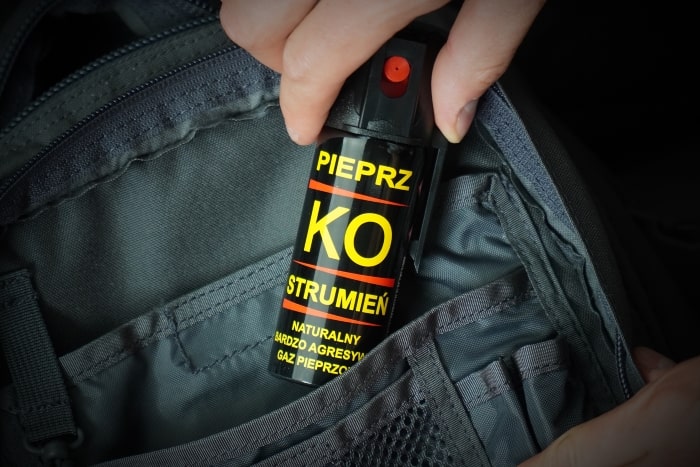 KO Jet is a classic manual gas thrower equipped with a jet nozzle, allowing precise use of gas over a slightly longer distance. KO Jet is devoid of the problems typical of budget handheld gas throwers - bursting and jamming heads. The head, button and nozzle in Klever gases are made of a solid polymer, which will guarantee us the reliability of use in any situation. The content of the container itself is the most common container, it is a standard 10% capsaicin solution, with the effectiveness corresponding to the needs of most users.

However, if we assume that the gas will not be used for hidden carrying in a pocket, but on a belt or in a purse, we can afford a slightly larger cylinder, allowing us to strike more targets. For this type of application, we can definitely recommend Klever Police Guard pepper spray, the active substance of which is in the form of a gel solution. 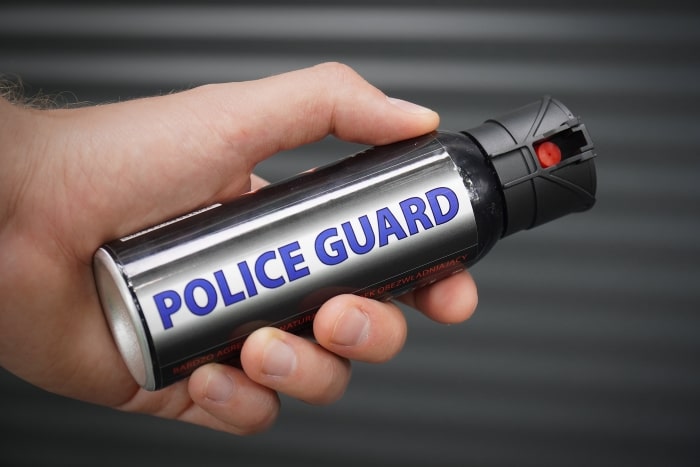 It is an invaluable advantage when it comes to the effectiveness and safety of using this type of agent. The pepper spray in the gel sticks to the body of the attacker, making removal difficult and constantly irritating the skin and eyes. When used in strong winds or indoors, the gel form of the preparation prevents irritation of the user. As in the case of KO Jet gas, the nozzle of the device has been profiled so that the fired gas creates a compact stream, which, combined with high pressure and gel preparation, ensures a high firing range.

For professional use, we recommend an even larger caliber. Typically designed to counteract groups of people, fire extinguisher throwers are widespread among riot police officers. The spacious canister allows not only to store a large amount of the preparation, but also guarantees high pressure. This translates into a much greater range of the stream than in the case of traditional manual gas throwers. 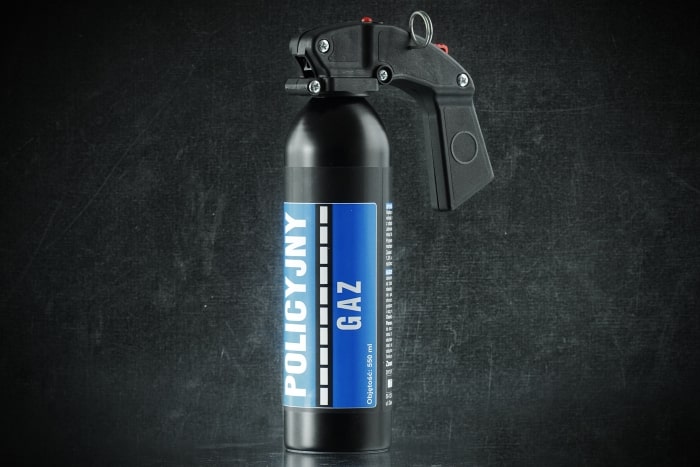 This handheld gas thrower will be most useful in business applications - object protection or crowd control. 550 ml of irritating substance is definitely sufficient for application on large groups of aggressive people. A comfortable button with a large surface allows easy use, even when wearing thick protective gloves. To ensure maximum safety, the manual gas thrower is secured with a cotter pin, completely preventing its undesirable use.

Speaking of pepper spray, one cannot fail to mention the Mace company and its products that stand out from the competition. The Mace company itself is a precursor on the pepper spray market - their roots date back to the 1960s, when Alan Lee Litman - the company's founder - designed an irritating mixture of chemical compounds, which he introduced to the civil market 20 years later. Over the last 40 years of commercial activity, Mace gases have gained the trust of both law enforcement officials and private users. 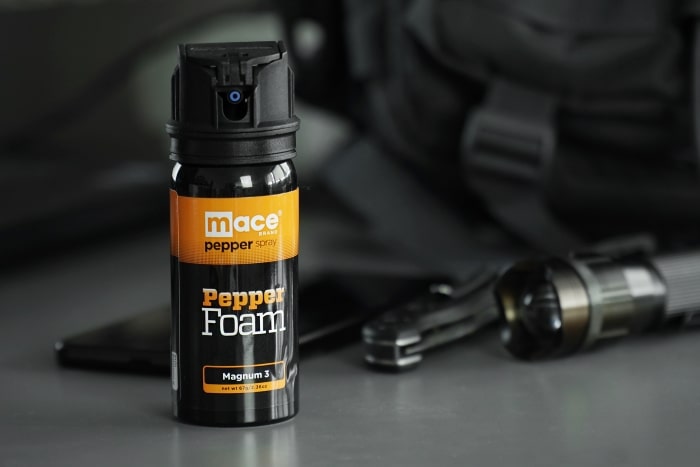 The discussed model is significantly distinguished by functionality compared to competing products with functionality. First of all, the irritating factor appears here in the form of foam - the most universal in general use. It combines the advantages of the cloud - a large area of impact and ease of use, with the safety of using the jet. Although it is not as wind resistant as the gel, it allows safe and effective use both outdoors and indoors. In addition, the preparation contains a UV pigment invisible to the naked eye. After illuminating it with an ultraviolet flashlight, it will make it easier to identify the attacker after he is stopped by the police.

The last gas presented by us also comes from the aforementioned Klever and was created with a slightly different type of attacker in mind. If a wild or aggressive dog is a potential threat to us, it is worth reaching for pepper gauze dedicated to defense against animals. As you know, the dog is not determined to hurt us, but has simply been raised in the wrong way. These animals are also not in the habit of taking drugs or alcohol, which significantly shift the pain threshold in humans. 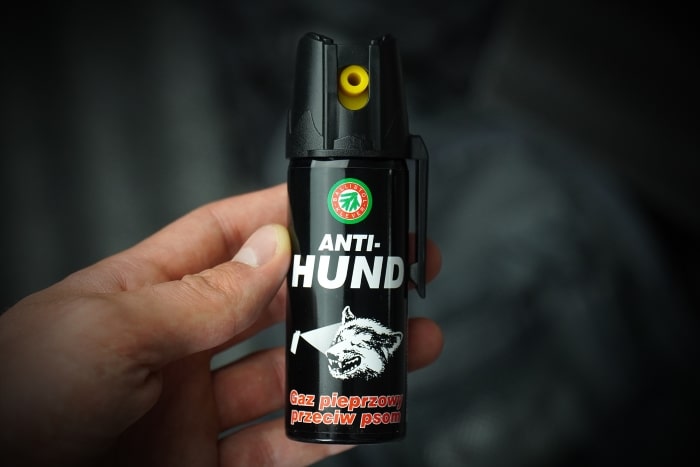 For this reason, scaring off an aggressive dog is easier - therefore there is no need to use preparations with a calculated "growth" strength. Therefore, in order not to harm the excessively more sensitive than human smell apparatus of such a pet, it is worth considering buying pepper spray for dogs - we guarantee that it will work as effectively as the standard versions, and its consequences will be much milder for the animal. After all, the fact that they have thoughtless owners is not their fault - so let's choose a solution that will keep us and them safe.