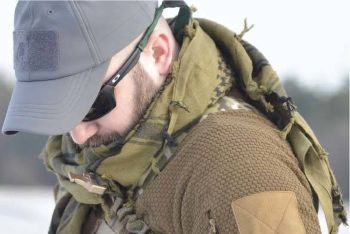 Helikon-Tex has a very wide range of products. The Polish manufacturer constantly expands its product portfolio, focusing mainly on clothing, which becomes more and more renowned across the markets. This in turn results in steady increase in clients numbers and creates continuous demand for Helikon-Tex products. To show the extensiveness of the company’s portfolio, we will focus only on a part of the products it has to offer - blouses ranging from military shirts, through fleeces, field jackets, to range hoodies.

We’ve picked six products, which in our opinion will be a good choice for various uses or weather conditions but at reasonable prices. For today's breakdown we’ve chosen:

CPU field jacket is definitely a strong and popular point in Helikon-Tex portfolio. Made of NyCo ripstop, based on Polish wz.2010 field uniform is fitted with 6 reasonable sized pockets. Two on the chest, two on the arms and two on the forearms, all of them zippered. It is also worth mentioning that chest pockets are also accessible from the top, through flaps with velcro. 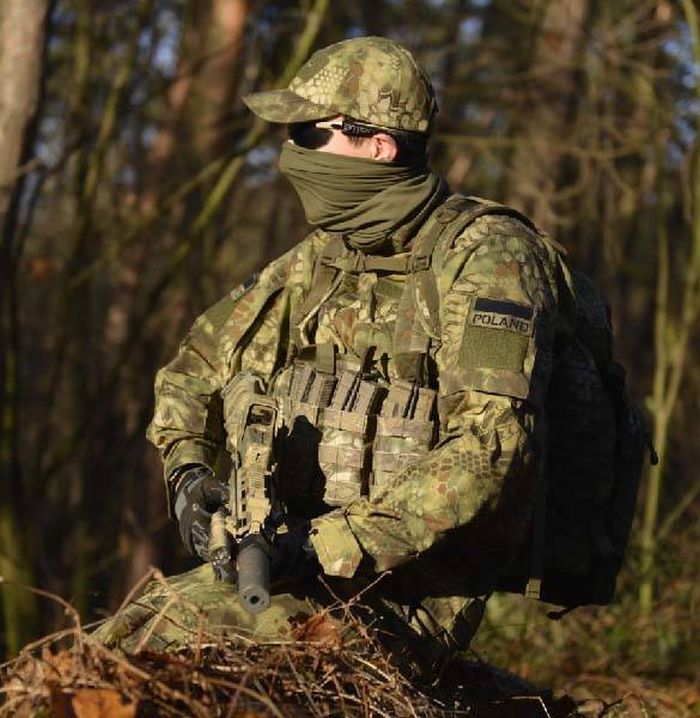 Important feature of the CPU Field Jacket is that due to its design, it is compatible with almost every tactical vest, without any functionality impairment. Helikon-Tex offers CPU Field Jacket in eight different camos, including its own designed Legion camo.

Helikon-Tex also constantly develops its combat shirt offer, and MCDU Combat Shirt is a good example of it. It is one of the newest products, combining great ergonomics with durability. The shirt is made of two fabrics - NyCo ripstop in the upper part and TopCool in the lower, which is designed to be used with tactical vests. TopCool is a moisture wicking, quick drying flexible fabric, which greatly increases comfort especially in periods of increased physical activity. 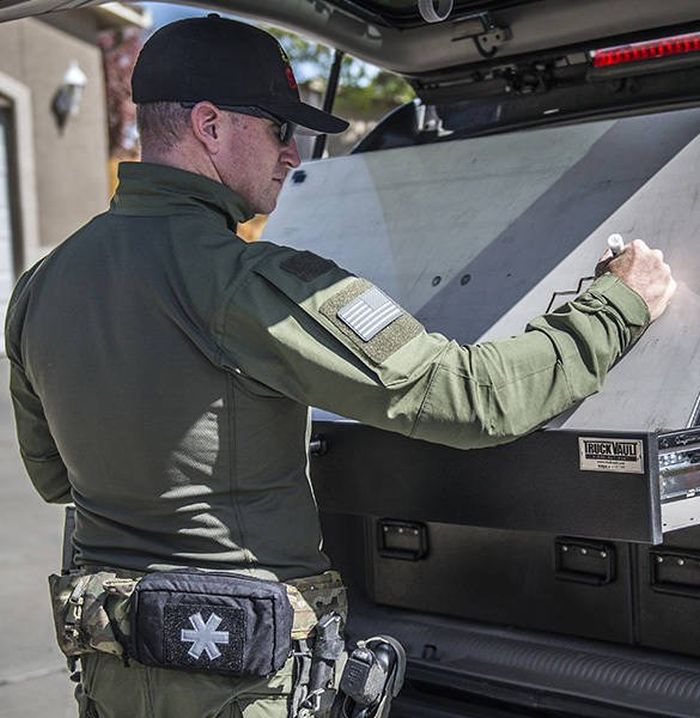 Apart from that, we can find two zippered spacious pockets on each shoulder with velcro on the outside which enables the user to use ID or morale patches. Moreover, there are also two pockets on each elbow to fit dedicated elbow pads for additional protection.

In the field of cold protection Helikon-Tex has also a lot to offer which can be seen in many different fleeces offered by the company. As a first fleece in our breakdown, we decided to describe Alpha Tactical Grid Fleece Jacket. It is a lightweight, versatile fleece jacket being sold as a part of Helikon-tex Urban Line. The distinctive feature is the honeycomb-like pattern of the fleece. As a part of the Urban Line it works great with other Urban Line Products such as Gunfighter or Trooper jackets, keeping its user warm even in negative temperatures. However, it also works great as a mid-layer between underwear and some thicker fleece in case of very low temperatures. 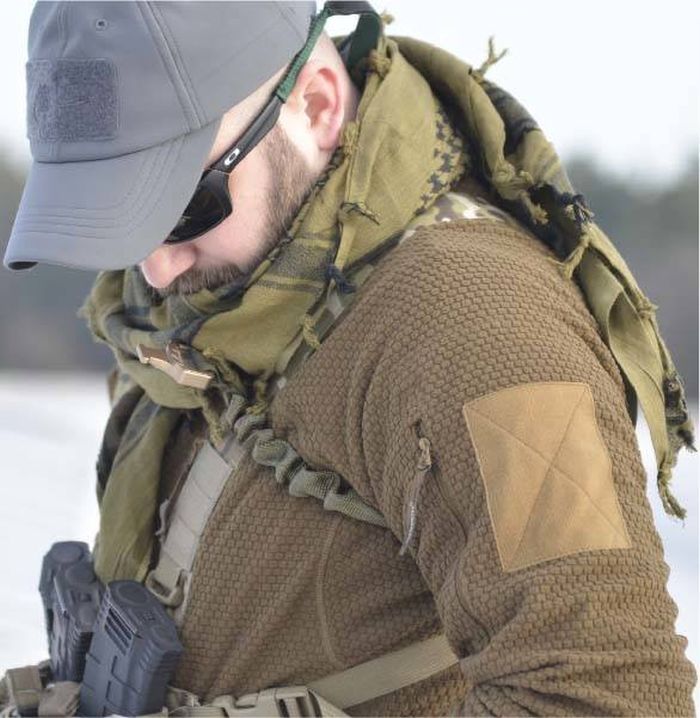 Apart from very good thermal features. The jacket also offers a well thought, practical cut. Five decent sized pockets and their placement add jacket even more convenience - two are placed on the sides, two on the arms and one on the chest. We also have to mention that the chest pocket has a headphone slot and dividers, therefore it can easily fit a small radio with a headset.

The fleece jacket also has velcro pads on the arms, and a small but very useful element - drawstrings at the bottom.

A bit heavier fleece variant in the Helikon-Tex portfolio is the Infantry tactical fleece. As You can probably tell by its name, it was based on the fleece commonly used by Polish Land Forces. It is made of warm, heavy, 330 grams fleece which will surely handle even very low temperatures. The pocket layout is similar to the one that may be found in Alpha Tactical Grid Fleece Jacket we have described above - two on the sides, two on the arms and one on the chest. 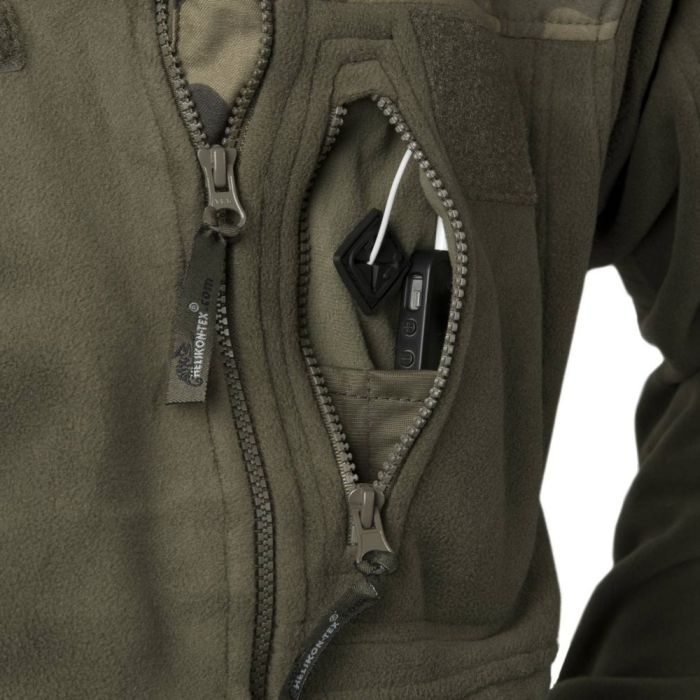 As you can easily see, the chest pocket also features some internal pockets that will easily fit small objects or a radio with a headset. Another important feature of the jacket is that elbows are reinforced with nylon inlets, which will surely prolong the product lifespan. All those things combined make Infantry jacket worth recommending - it will surely prove its worth during a field trip as well as at the training area.

When we talk about a really warm tactical fleece it is also impossible not to mention the Helikon Patriot jacket - hooded twin of the Liberty jacket. Patriot is for sure a heavyweight - it features double, 390 gram fleece which makes it extremely good at keeping its user warm.

In terms of design, Helikon-tex has also made a great effort to combine versatility and durability with best possible thermal comfort. Similar to Infantry, Patriot has nylon-reinforced elbows and shoulders, which will make the jacket to serve its user longer. 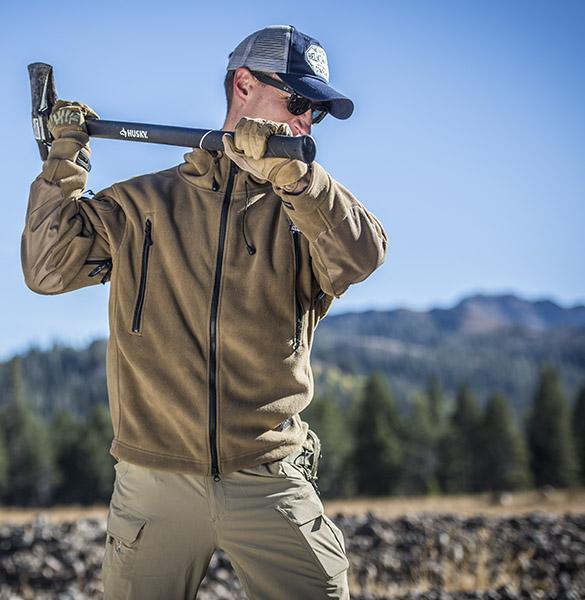 The pockets layout is also more than satisfying. The Patriot has chest pockets with internal dividers, two on the arms, one on the forearm, and one, big pass-through pocket on the back. Another interesting feature is that the rear of the jacket is extended and will “cover our six” for example during crouching or leaning.

Patriot is also equipped with a hood and collar which protect head and neck from heat loss. Moreover, the good is also designed in a way to prevent dropping down to user eyes. It also has to draw strings for additional adjustment.

Last, but not least, we have the Range Hoodie - one of the newest Helikon-Tex products. It is lightweight, versatile sweatshirt/blouse designed for shooters both casual and professional. It is made of the TopCool fabric, the same for example used in combat shirts. That makes it very good at keeping its user dry and comfortable. Apart from that, there are Versa Stretch inlays on both sides, to ensure the best possible freedom of movement. 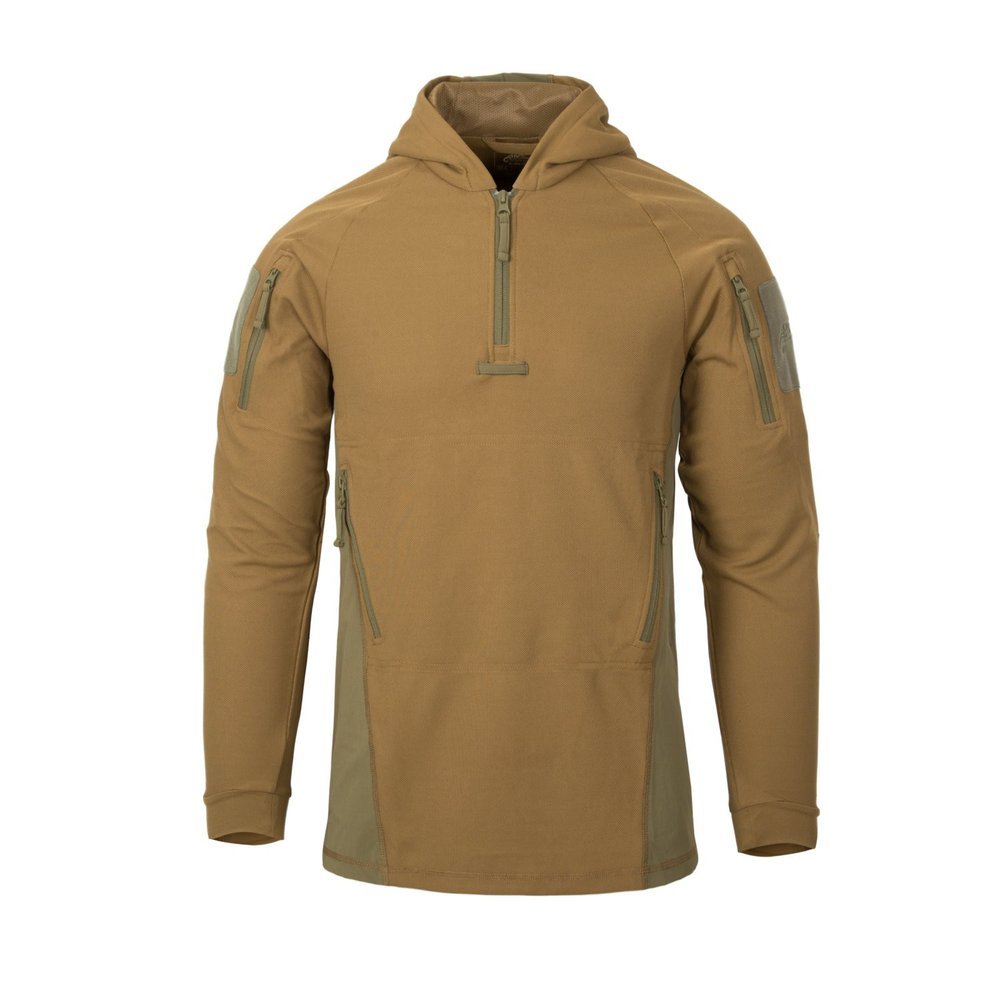 Interesting part is the kangaroo pocket in the middle, accessible from both sides, placed in a way to be compatible with chest rigs and other tactical vests. As you can tell by its name, the blouse also features a hood, but the usual adjustment drawstrings had been replaced by the Versa Stretch inlay.

The manufacturer also fitted the Range Hoodie with a half-way zipper and a safety glasses hanger. Apart from that, there are also two pockets placed on the arms and two special ones on the elbows, designed to fit elbow pads for additional protection

We can surely recommend the Range Hoodie to all shooters and other shooting range users. We are very confident it will meet their expectations.