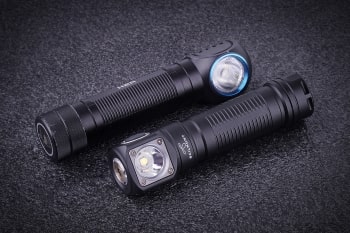 We are introducing a new brand of headlamps to our offer, which has been of great interest to us for a long time - mainly due to the positive opinions of our friends. As they have already arrived at our warehouse, we decided to check how they are doing and we must admit that we are not disappointed - on the contrary. To make a reasonable reference point, we took the most popular Skilhunt model - the H04 RC and paired it with the extremely popular Olight H2R - both are universal angle flashlights, use the same battery, and both are dedicated to EDC applications.

At first glance, the products do not differ much from each other. Both manufacturers come from China, the bodies of the flashlights are milled from aluminum and then covered with an anodizing coating. The LEDs in both models come from renowned manufacturers - Samsung in Skilhunt and Cree in Olight. The body of the second one is slightly larger, while both belong to one size group. The devil, however, is in the details that determine the characteristics of both flashlights.

We checked the flashlights for several parameters:

Starting with the bodies - as we mentioned before, both are made of milled aluminum. This provides both flashlights with high mechanical strength. Texturing to improve grip is similar in form and both provide high stability. The first big difference that we can see is the heat dissipation radiator milled in the head. It is present in both Olight and Skilhunt, but at first glance we can notice a diametrical difference in their design. 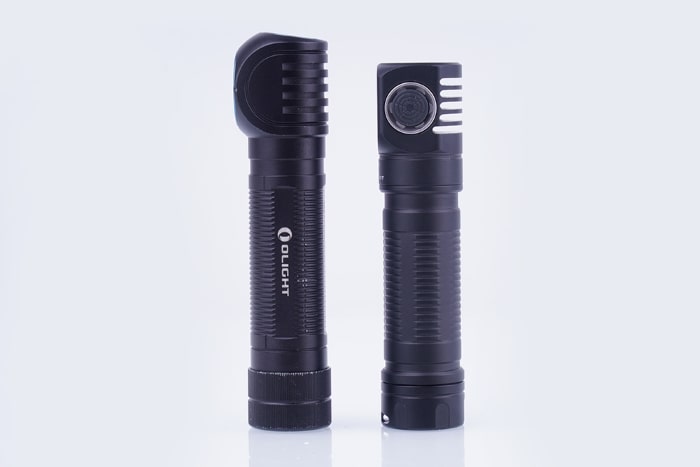 It is worth mentioning here quickly what the purpose of the heat sink is. It increases the contact area of the object from which we want to emit unwanted heat with the air, which significantly affects the cooling process. The heat sink used in the H04 RC has long indentations reaching almost half the head of the flashlight, which radically increases the heat transfer surface. Compared to this, the ribs milled on the Olight's head appear to be merely decorative.

Another interesting solution used in Skilhunt is a copper PCB to which the diode is soldered. The choice of this material is not accidental and allows for more efficient heat dissipation to the heat sink. It is also worth noting that the area where the board is fitted is directly tangent to the heat sink. This allows energy to be transferred directly to the heatsink arms.

An important external element is also a button that allows us to operate the flashlight. In both cases, it is placed in a convenient place - the side of the head in H04 and the top of the head in H2R. The button in the Skilhunt is better felt, but due to the location and the way of gripping flashlights of this type, it is not so important. However, it provides us with something that the competitor definitely lacks - communication of the battery charge status. The LED integrated with the Skilhunt button flashes, allowing us to quickly assess the remaining operating time. 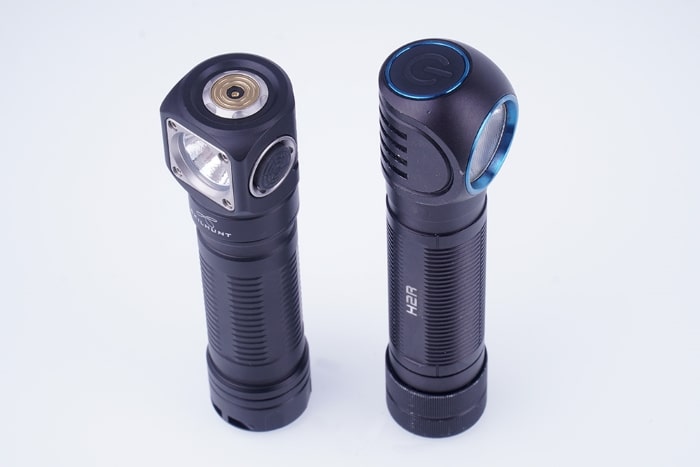 Charging in both cases takes place via the integrated magnetic port. In the case of Olight, it is connected to a magnetic foot, while Skilhunt has an additional port on the top of the head. The system used by Skilhunt shows higher efficiency. The 3500 mAh battery included in the set is charged via the magnetic port in 3.5 hours. It takes 4.5 hours to charge the Olight battery, which is smaller by 500 mAh. It is also worth paying attention to the batteries used. For the proper operation of the Olight flashlight it is necessary to use custom batteries with a protruding "plus". This means that if we want to buy spare models, we will be forced to purchase more expensive, dedicated batteries. Skilhunt, on the other hand, uses the most standard version, produced by many manufacturers such as LG, Sanyo or Samsung.

As we mentioned before, flashlights use LEDs from renowned manufacturers: Samsung (Skilhunt) - Cree (Olight). They differ significantly in their characteristics as well as in the optical system used to direct the light. The Cree XHP35 diode is characterized by cold light and high power in turbo mode, while the Samsung diode has a much more pleasant, less tiring shade and a smaller but not low maximum power.

How many lumens should a LED flashlight have?

It is worth discussing the topic of power in the context of our potential needs. As headlamps for everyday use, we basically never need enormous power. First of all, it does not have much to do with long range - here the optical system used is definitely more at stake here, which will be discussed in a moment. First of all, however, we must remember that LEDs can maintain their highest power only for a very small period of time, depending on the efficiency of the cooling system - usually about a minute. Therefore, when buying a flashlight, it is not worth paying too much attention to the maximum power, but rather to its overall values and efficiency. A very high maximum mode combined with unreasonably selected standard modes may translate into low comfort of everyday use.

Coming back to the optical system - two different systems are used in the discussed flashlights, but they give quite similar results. The orange peel reflector used in the H04R evenly distributes the light with a nicely cut focused beam angle. This allows for accurate close-range illumination and for getting a good focus at mid-range. Olight, on the other hand, has TIR optics, which is also responsible for even distribution of the stream. It was also equipped with a honeycomb diffuser, which additionally blurs the light, distorting the stream and limiting its range. 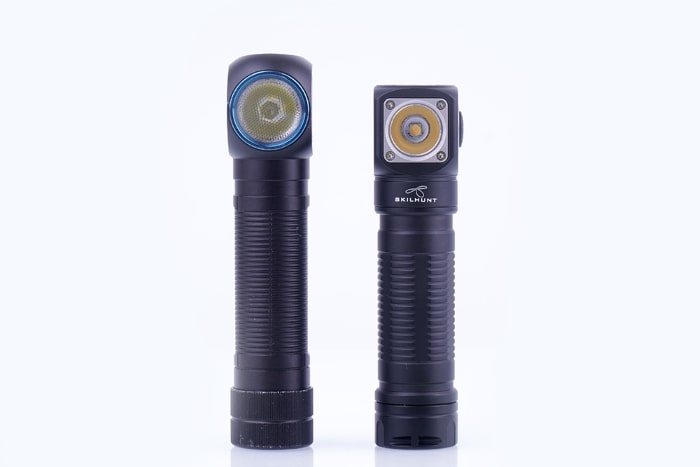 Overall, both models are an interesting choice when it comes to an EDC flashlight with a headlamp function. Skilhunt shows here much faster loading, optimally solved modes that can be programmed according to your preferences, and a well-designed cooling system. In a broader aspect, it will also be more economical, allowing the use of standard 18650 batteries. Olight, on the other hand, provides higher power, although it is worth noting that only temporarily - the turbo mode is actually much higher, but it works for about a minute, the other modes are comparable to Skilhunt. There is also a question of preferences as to the color temperature of light and the optical system. Universal range and a pleasant neutral light color in the H04R or the cold Olight light, well suited to illuminating the near area.