Altama combat boots - from Vietnam to the modern battlefield 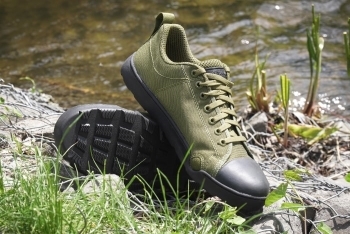 We are just introducing a new brand to our offer and we would like to bring you closer to its history and the products that represent it. The Altama brand has existed since the American intervention in Vietnam and has since then had the opportunity to supply the US Army in every conflict it participated in. Therefore, there is a huge experience behind it, which, combined with the current technological possibilities, translates into functional and modern projects. The modern battlefield has evolved considerably, however, as you will soon find out, some ideas are still alive in slightly different forms.

The manufacturer's offer has developed a lot since 1969, in which it was based on one model - M-1966 Jungle Boots. The then-ongoing Vietnam War allowed for the development of the company, and the popularity it gained after the war meant that the company still produces variants of the classic model. No wonder - footwear of this type is characterized by low weight, high breathability and quick drying.

In addition, the legendary Panama sole used in the shoes in question was perfect for muddy areas thanks to the characteristic profile with inclined tread walls. Unlike models equipped with Vibram soles, they showed a very effective self-cleaning, thanks to which the tread remained functional even in clay areas.

The second milestone in the company's history was the creation of the Altama Desert Boot model, which was created for the Operation Desert Storm. The shoes were primarily intended to provide comfort in the unfavorable conditions prevailing in Kuwait. The combination of high, closed construction and breathability is not easy - especially in the case of military boots, which must additionally have adequate strength. However, the Altama military boots proved their worth in battle, and the end of the war brought the company's development on the civil market. Panama sole shoes were successful again, perfect for off-road expeditions. 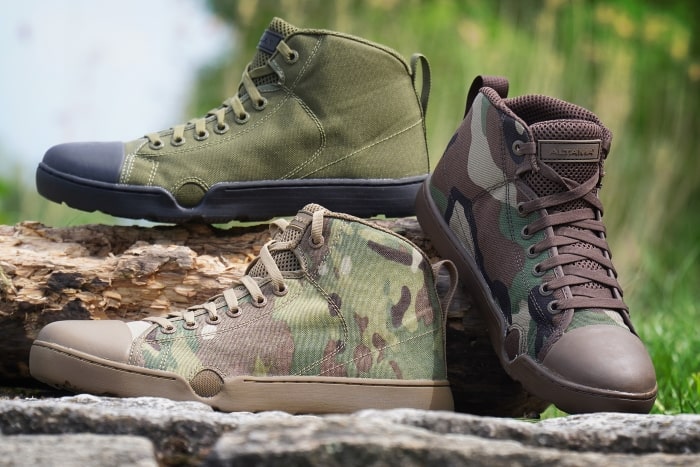 Recent years have seen the company's greatest development, dividing the model spectrum into three lines. The first of them - Tropical - is based on the most proven Altama design - the previously mentioned Panama military boots. This section includes both original specification models and development versions adapted to different environments.

The Defense line includes modern military boots in various configurations, including models created in accordance with the American specification of AR-670 uniforms. We find here high ergonomics and good protection of joints against potential injuries. Models from the Defense series are created with the most difficult terrain conditions in mind.

Elite is a series combining lighter, more sporty models, but not devoid of tactical and military pedigree. There are tactical shoes dedicated to urban applications and work in water conditions. Despite the form of classic sneakers, these constructions are ready to serve in harsh environments.

But let's take a look at a few models and see what useful features they provide to their users. For our blog, we chose the three most characteristic tactical boots, which, thanks to the solutions used in it, stand out in field applications. The models in question are Altama Raptor, Maritime Assault and Jungle Assault tactical boots.

As we mentioned earlier, the Defense line includes modern shoes with a typically tactical use - and therefore light, mobile and, most importantly, ensuring the safety of the user. One of the most interesting models in this series is the Raptor 8, which is, in a way, an indicator of the features it contains.

Raptor 8 are tactical lightweight shoes, dedicated to work in urban conditions. At first glance, we can see that the footwear is made of a characteristic material - lightweight, breathable mesh, reinforced in sensitive areas by laminating with a polymer. This technology allows for a low weight of the shoe while maintaining adequate resistance to abrasion and, most importantly, the loads resulting from their use.

A polymer rim was also used in the lower part of the shoe, where it connects to the sole. The polyurethane used there effectively reduces the ingress of water into the upper, and protects areas that would be susceptible to rubbing from gravel or branches. The safety of footwear use is guaranteed by the ASTM F2913-17 and ASTM F2413-18 standards, which define the required anti-slip properties of the sole and the degree of protection of the toes against crushing. 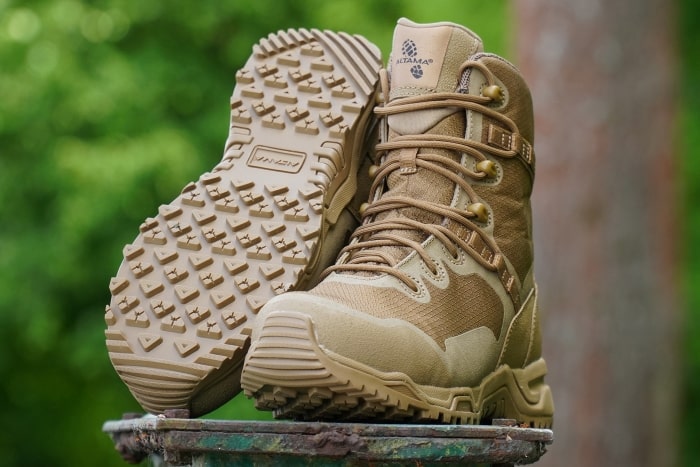 An interesting solution in the discussed model are also the cushions located in the rear part of the upper. We can find them in many models of basketball shoes - a sport that undoubtedly has a significant impact on the ankle joint. These types of pillows are designed to protect the Achilles tendon from potential damage. In the case of tactical boots, combined with a high upper, they guarantee safety in difficult terrain.

The Maritime Assault is definitely a more specialized model - it was designed to work in water conditions - also to work with military diving fins. The roots of this type of tactical footwear can be traced to the "Coral Boots" or "Coral Creepers" used during the intervention in Vietnam. It was extremely light footwear made of fabric covered with a polymer on the underside. Coral Boots were used to work in sea conditions - thanks to the aforementioned lightweight construction, they did not hinder swimming as well as standard military footwear, and the “sole” applied directly to the upper protected the soldiers' feet from being hurt by rocks or corals. 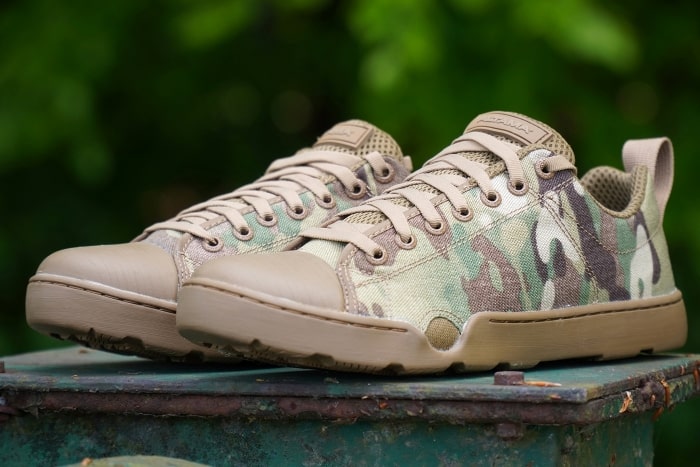 However, the Altama tactical boots have evolved a lot, and despite a similar purpose, they are already full-fledged footwear. The sole here has been solved in an interesting and very functional way. In addition to the commonly found midsole, we have a sturdy ABS rail here. It guarantees the rigidity of the entire structure, which will be invaluable when climbing the rungs of the ladders. However, in order to guarantee the anti-slip properties suitable for wet surfaces, the entire sole structure is embedded in vulcanized rubber.

Contrary to most standard shoes, the insole of which is important for shock absorption, the version made of ergonomically shaped polyurethane was used here. It stabilizes the foot in place and does not soak, thanks to which drainage of water from the shoe is much easier.

And finally, something a bit more classic - the Jungle Assault model from the Tropical line. As mentioned, this line is derived from the historic M-1966 Jungle Boots, retaining their use. Jungle Assault is a typical military boot - durable, stabilizing the ankle and ensuring the safety of the user. The design of the shoe is in fact a combination of classic and modern solutions, which together guarantee comfort and reliability. 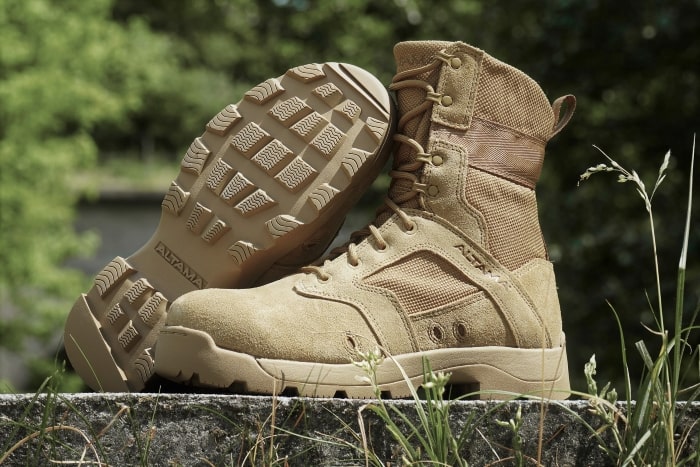 The Panama sole used in the footwear is responsible for great properties on muddy or clay surfaces. Unlike many other soles, Panama has a large and widely spaced tread, preventing mud from getting caught in it. In combination with the sloping ankle walls, the sole has excellent self-cleaning properties.

A thick sole to increase the strength of the entire structure has been additionally sewn to the upper. The upper itself was also created primarily for durability and protection of the user. The entire lower part of the upper is made of nubuck cowhide, which, apart from its natural durability, facilitates impregnation. The upper part of the upper is made of nylon, which offers greater flexibility. To stabilize the structure, however, additional leather "stays" were applied to strengthen the stretched zones.