Which tactical belt to choose? 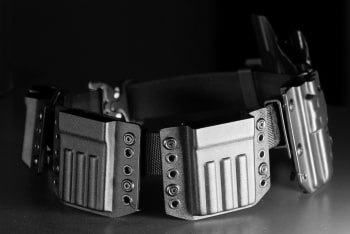 Each of us was once in possession of a belt, so we assume that its primary function - to keep our pants in the right place - does not need to be discussed. However, while searching for a belt, tactical, we have to ask ourselves what it is supposed to serve us for. Some of us will carry a light, service pistol and handcuffs on it, while others will carry a one-and-a-half-kilo Shadow with a set of magazines. Let's review the solutions present on the market together in search of the most suitable belt for us.

The first thing we pay attention to when looking at the belt is the buckle, but it is not the buckle that will stabilize the equipment carried on it. The most important element in this context is the belt from which the belt is made. When looking for a tactical model, we assume that it will be subjected to loads. Therefore, adjusting the type to our equipment, we must first of all assess its total weight. Of course, there is no mathematical formula to calculate what belt we should use for what overall weight of the equipment, but we can make general assumptions here.

First, we can guess that the rigid tactical belts dedicated to shooting will demonstrate the greatest stability. They can easily hold even a few kilos of equipment in place, which will be invaluable in sports or tactical applications. However, in the case of everyday use, they will not provide as much flexibility and convenience as standard, unstiffened models. Assuming, therefore, that we will not carry a fully steel racegun, but a compact equipped with a polymer frame, it is worth turning to models with moderate stiffness. 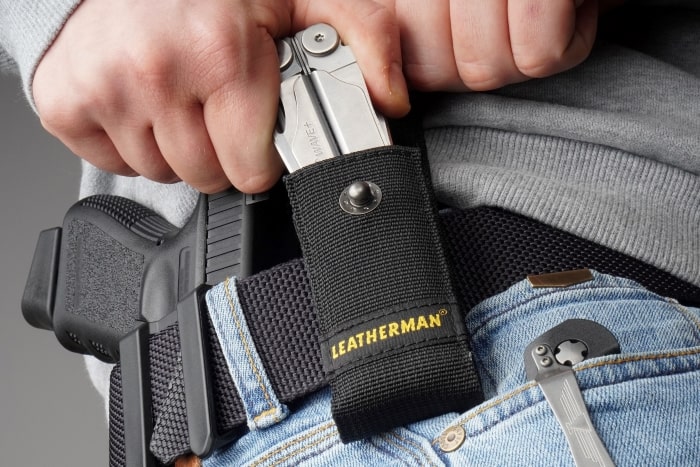 Talking about stiffness, however, is highly subjective, so let's take a look at the solutions found in tactical belts, which are responsible for said stiffness. First of all, of course, the thickness of the tape. No surprises here - the thicker the tape, the stiffer the belt. Models with values below 1.5 mm are unlikely to be recommended for carrying holsters if they do not have additional reinforcement elements. What elements are we talking about? For example, with transverse ribs, which significantly stiffen the belt, additionally making it less susceptible to loosening in the buckle.

Types of stiffened tactical belts - with inlay or without - which is better?

In the case of the previously mentioned belts with a typically "external" application, we will meet two methods of stiffening. The first is to create a laminate - most often it will be a tape, a polymer insert and in some cases Velcro, allowing the attachment of an inner belt. This solution guarantees the highest stability, but it is not without its drawbacks. First of all, in the case of models with an applied trim, the rubbing of the kydex holster against an equally hard insert may cause the material to wear out quickly. A similar situation can occur with threads that may simply be cut by the edge.

For this reason, some belts, such as, for example, Thirdline from Bayonet, are made of two, medium-stiff belts, thanks to which they maintain the appropriate properties while being free from disadvantages. By the way, it is worth mentioning the materials used for production. Most often we meet two types - polyamide and polyester.

Polyamides - including Nylon and Pa6 - are materials known for their mechanical strength, but also for their high price. Therefore, we can expect them in slightly higher-class products. Polyester, on the other hand, can be found in cheaper models. However, this does not mean that polyester belts are not strong enough to serve us well. They can be somewhat less durable than extremely durable polyamides, which, however, offset by the usually much lower price, can turn out to be a good investment.

Which buckle will be best for shooters belt?

Speaking of a tactical belt, we cannot imagine it without a solid buckle. Of course, in the case of dynamic shooting, we encounter IPSC belts without such elements. However, in the case of a strap for both everyday and tactical applications, we agree that the prospect of its quick release is important. Depending on the needs, budget and our preferences, we can choose models equipped with several versions of buckles. 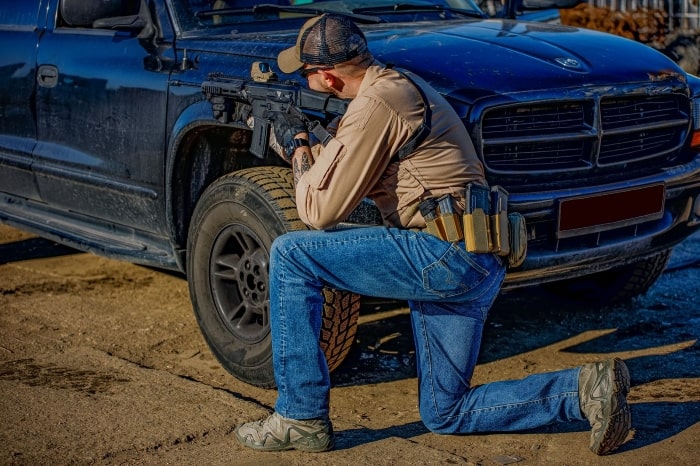 The first and most basic will be the so-called frame - a rectangle with an inner beam on which the tape is sewn. In this case, fastening will require each time the belt is threaded through the frame. We can meet both polymer versions and definitely more durable steel and aluminum ones. In this case, we cannot expect the possibility of quick release, but simplicity translates into reliability, of course, appropriate to the quality of the material.

A very popular solution are also polymer buckles of the type that we can collectively call Quick Release. These are solutions that we perfectly associate with all kinds of backpacks, but in the case of tactical belts, usually definitely enlarged. This is due to the limitations of the material - a large thickness of polymer elements is necessary to maintain adequate strength.

Especially that in the case of QD buckles, the elasticity of the polymer is responsible for the action of the locking mechanism. It is therefore subjected to stress each time it is used. For this reason, when buying a belt equipped with this type of fastening, it is worth paying attention to the manufacturer of the buckle itself. Reputable belt manufacturers use products from Woojin, Duraflex and ITW Nexus.

The last, undisputed queen of tactical belt buckles - AustrAlpin Cobra and all its derivatives. Cobra is also a QD buckle, however, instead of a flexible structure, it has an advanced locking mechanism. Depending on the model, it is characterized by several variables. First of all, the tensile strength - even the basic models have a resistance of 9 kN, i.e. 900 kg in the case of the clamp itself. The most powerful versions, on the other hand, reach 46 kN (over 4 tons) and are used with safety harnesses - both used in extreme sports and dedicated to helicopter crews. 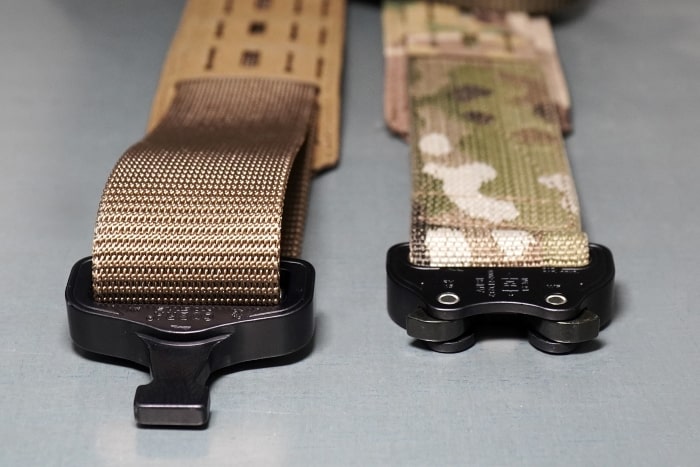 Finally - accessories, which in many cases are no less important than the belt itself. We will not dwell on the configuration of holsters and pouches, but rather on elements directly dedicated to improving our comfort associated with carrying them. Inner straps are already somewhat of a standard in all sports applications. They allow for a much better stabilization of the belt, and allow it to be put on without unnecessary tiring of interlacing pouches and loops.

The second element improving stability, especially if we use MOLLE system elements, will be an overlay dedicated to this standard, or a belt with an already integrated panel. It will allow us to mount the pouches rigidly. In addition, many models are adapted to work with tactical vests, thanks to which MOLLE belts can often be noticed both in shooting sports and professional applications.