KA-BAR 1217 - A legend in a contemporary version 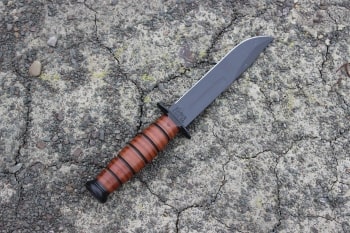 In the history of knives produced today, there will certainly be a few icons, which with their uniqueness or well-thought-out design are remembered by users. Models such as Benchmade Osborne, Spyderco Military or ESEE Izula have gained market recognition, as evidenced not only by their extremely high sales, but also a specific envelope of fans and a wide market of affordable accessories. Few knife models, however, can boast of such a long history and an imprint on the historical background, such as the KA-BAR USMC Fighting / Utility Knife.

However, we will start the story with the predecessor of the KA-BAR - the Mark I knife. The Mark I was a standard combat knife, used by soldiers back in the First World War. A peculiar hybrid of brass knuckles with a dagger, it showed its advantages in tight trenches, but it suffered from some defects. The expensive, mostly brass structure equipped with a thin, symmetrical pommel was characterized by delicacy, and the functionality was limited to combat, mainly to stabbing.

The realities of World War II quickly verified the usefulness of the knife, so in 1942 the United States Marines decided to adopt a more modern model, which would work well in the conditions of a new conflict. Colonel John M. Davis and Major Howard E. America in collaboration with Union Cutlery contributed to the prototype of the later KA-BAR. Based on the knives available at that time for both military and civilian use, they created a model which, after their improvements, were to become the optimal design in terms of combat efficiency, everyday usability as well as costs and production time. 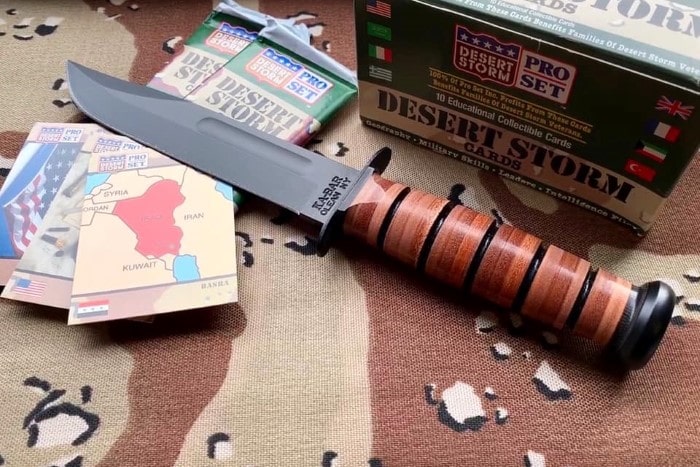 Therefore, using the modern 1217 model, directly derived from the Fighting / Utility Knife, we can take a look at the most important features introduced to this design.

Starting with the blade - it stood out from the models used at that time by the military with a large surface. Referring to the civilian Western L77, on which the KA-BAR was modeled, despite the same profile - clip point - the USMC model is distinguished by a much larger head, and most importantly, a clearly noticeable belly. Although its curvature is slight and the long part of the cutting edge is a straight line, it has allowed for a dramatic improvement in cutting properties over previous dagger designs.

Thanks to this, the blade determined the differences in the knife's usability compared to other, modern models, for example, the no less iconic Fairbairn-Sykes dagger. While the dagger in practice was used only for stabbing wounds - it was favored by the rhomboidal cross-section significantly facilitating penetration - the KA-BAR was perfect for both cutting injuries and everyday work. The Fighting / Utility Knife mark refers to the universal use of the model.

However, we must remember that the word "utility" was meant to symbolize the daily activities of a soldier of the time, such as opening boxes with ammunition or cans with food rations. The design was therefore not created with an intensive use in bushcraft in mind, but rather as a knife that today we would call "tactical".

Returning, however, to the design aspects, the handle is an equally interesting element. A relatively rare solution in the case of mass-produced knives is the use of a handle made of leather. Some people may think that leather is not both the most advanced and the strongest materials. In this case, however, not so much the material as the process of its forming determines the reliability. The handles of the models, both the original and the modern version, are made of cowhide, pressed to obtain adequate compression and thus hardness and resistance to deformation. 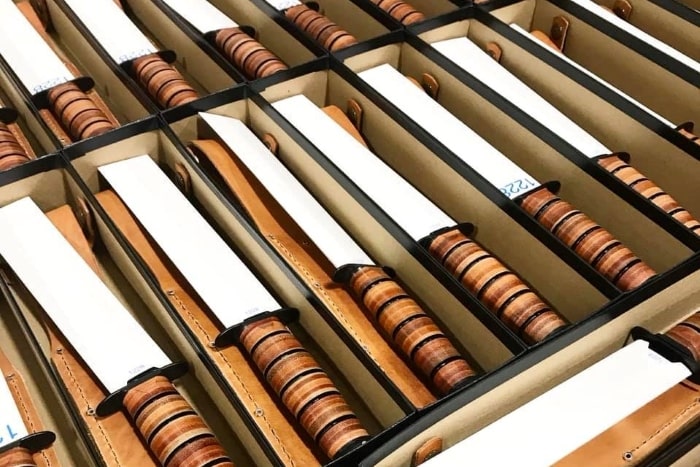 It is also worth paying attention to the very structure of the grip, including the pin passing through it. We meet here a structure called stick tang or sometimes rat tail tang. It therefore extends the entire length of the handle, being secured at the end with a pin through the head. This ensures a stable seat of the blade in the grip and a significant reduction in weight compared to full tang knives. However, this has some consequences - as you know, models with a narrowed spindle show lower resistance to radical use. However, when using KA-BAR as intended, and not, for example, for chipping, we will have nothing to fear.

The grip surface itself, despite the apparent smoothness, maintains grip even in a wet hand. This is due to the deep cuts perpendicular to the axis of the knife, which, apart from being the texture itself, are designed to drain water from under the user's hand. However, in case we are not satisfied with the adhesion of the leather, the modernized versions of the 1217 use much more modern materials. For example Kraton, an elastomer that is a more durable, both in terms of mechanical and chemical resistance, substitute for natural rubber.

And at this point we come to the last aspect related to KA-BAR. The modern Legend also has many development versions, both in terms of the materials used and small but significant design changes. In addition to the use of the previously mentioned Kraton in place of the leather, we could also encounter changes in the steel used mainly. The profile itself has also changed in several versions, allowing for a slightly different use. So let's take a look at the most interesting modifications.

Visually referring to another development model - Dog's Head - a structure designed for use in unfavorable conditions. The use of D2 steel in place of the standard 1095 increased the blade's resistance to corrosion, while not increasing the susceptibility to blunting. The beginning of the cutting edge has been profiled with serrations to facilitate the cutting of ropes and belts - this type of arrangement is known as a combo. In addition, the manufacturer chose a scabbard with a much more outdoor profile for the model. Cordura construction is more comfortable for long-term carrying and allows it to be attached to the thigh. 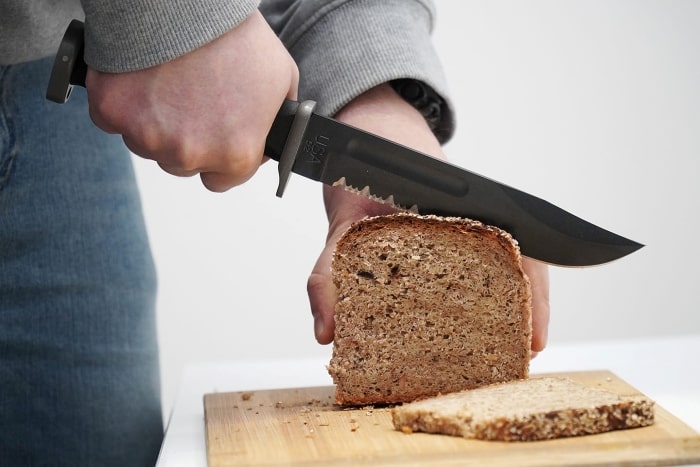 The KA-BAR offer includes both smaller and equipped with a tanto blade versions of the classic 1217. This model combines both these features, together with a combo cutting edge. A craton handle with a reduced cross-section fits perfectly in both smaller and standard hands. The compact size, a typically usable blade and the safe and comfortable grip make the knife perfect for tactical applications and, in a way, even as an away EDC.

It's hard to imagine a more tactical blade - the fact of dubious kinship with the tanto is quite another issue here. The model has been adapted both to an effective cut, obtained here by a prominent belly, and to penetration. A long, false blade led out on the spine relieves the structure and significantly affects the piercing potential. The scabbard added to the model is also characterized by a strictly tactical character. The rigid, reinforced nylon construction has been equipped with a large number of holes allowing the use of staples and the attachment of the knife in any position.