Digital and analog night-vision devices - to conquer the night 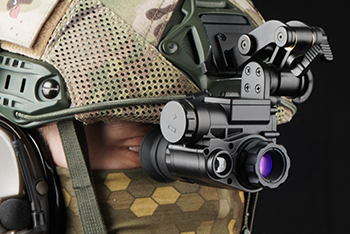 Digital and analog night vision devices - to conquer the night

Since forever, humanity struggled with severely decreased sight capabilities at night. To fight darkness and to improve vision at night, many light sources were invented to light up the observed field, making targets visible but also giving out friendly positions.

The research on night vision devices, giving the ability to observe the environment in low light conditions or total darkness, lasted for many years. The breakthrough was made in 1926 by J. L. Baird when he invented the first night-vision device.

The development of the first night-vision devices

The next breakthrough in owning the night was done, when V. K. Zworykin invented the first electro-optical image intensification device in 1933, a predecessor of present night-vision devices. The first use of night vision on the battlefield is dated to 1945 by the German army.

The night-vision scopes used by the Third Reich gave the base for further development of technology, thanks to the advantage they gave during night operations under combat conditions. Thanks to image intensification, soldiers utilizing night-vision scopes were able to quickly and accurately differentiate friends from foes, before they were even able to discover their positions, thus having a great tactical advantage.

How does a night-vision device work?

There are currently two types of night-vision devices, differentiated by the way, they process the image. Analog night-vision devices work by collecting and intensifying the light waves in both visible and infrared lengths. Collected photons hit the photocathode thus giving their energy to electrons, which then leave the photocathode and fall into the microchannel plate which is a glass plate with millions of tiny holes multiplying the number of electrons and thus, amplifying the electric signal several thousand times. After such a process, the amplified electrons hit the phosphatizing screen, thanks to which they are changed to visible light and thus the image visible in the display of a night-vision device.

Digital night-vision devices work differently. We won’t find the photocathode, tube, and phosphatizing screen. They are replaced by a complementary metal-oxide-semiconductor (CMOS) sensor converting light into a digital signal, which can then be further enhanced electronically and magnified several times. Such night-vision devices are placed between analog night-vision devices gen I / gen II because of the image quality one may obtain when using them. Most digital devices allow for image recording to SD/microSD card, brightness and contrast regulations, and adding overlays on image.

Thanks to the increase in energy consumption, digital night-vision devices allow for shorter work than analog night-vision devices. The biggest advantage of digital NVG is the endurance of their CMOS sensors and its resistance to bright light compared to the analog solutions.

What are the differences between different generations of NVG?

Because of vast differences in technologies and amplifying methods and systems used in night-vision devices, they were divided into four classes, also known as generations, offering different qualities of image intensification, brightness, and ranges.

Generation II night-vision devices offer much higher image intensification, allowing for observation in nearly total darkness. Such effects are achieved by using a multichannel plate or MCP, which multiplies electrons as much as 50 thousand times in contrary to 5 thousands offered by gen I devices. Because additional elements are used, the price of such is higher than previous generation night-vision devices. One can also meet generation II+ night-vision devices, which offer better image properties, noise reduction, and way higher power efficiency.

Core night-vision devices are invented and manufactured by ArmaSight company. Their image intensifier is based on the ceramic plate with metal elements in a similar manner to gen II devices but without an MCP plate. This difference allows for only a slight price increase compared to gen I night-vision devices, still enhancing brightness and image quality.

Generation III night-vision devices offer a brighter and crispier image thanks to the addition of gallium arsenide to the photocathode, but also the tube itself was upgraded by applying an ion barrier, thus extending the life expectancy of the whole device.

Generation IV is still in its prototype phase and not much is known about it.

It is also worth noting, that because of its high importance to the defense sector, the United States does not export gen III and IV night-vision devices.

But what exactly are the infrared illuminators?

As we previously stated, night-vision devices work by amplifying visible or infrared light, thanks to which, they allow us to see in almost total darkness, depending on their generation. But what if we happen to be in total darkness?

That's where infrared illuminators come into play! These infrared flashlights emit near-infrared light that's visible for night-vision devices and allow us to see in places, where it would be impossible otherwise without using flashlights with visible light.

Night-vision binoculars, monocular, goggles or scope - different forms of night-vision devices and which one will suit you best?

Night-vision monoculars and googles are destined especially for wearing them mounted on the user head by various methods like attaching them to the user's helmet or utilizing the so-called “skull-crusher”, the type of harness stabilizing the device on the head. Such night-vision devices should interest all service members, but also mil-sim fans. In tactical situations, they are often used in conjunction with infrared, laser aiming devices. They offer the most compact form and also come without magnification, allowing for easier use during the march.

Night-vision scopes are the night-vision devices designed to be used as weapon-mounted scopes and thus often come with an integrated reticle. They are mostly used by hunters, allowing them for easier target acquisition and identification in low light conditions.

Thanks to so many forms and options one can find a night-vision device that fit him or her the best.